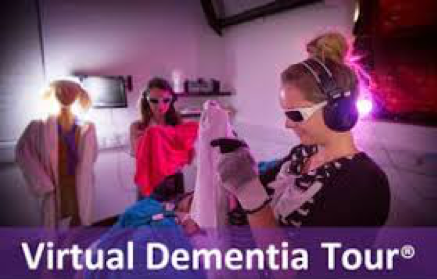 On July 24, 2019 Carolina Pines was the recipient of a grant provided by Second Wind Dreams. The grant allowed more than 75 staff members to experience sensitivity training enabling them to better care for residents with dementia. Three of our own staff also became program trainers and will carry the training forward for future team members. Congratulate Amy Mathews-Trzcienski, RN; Terri Beaver, Social Worker; and Emily Zheblik, Activities Director.

Facts about Dementia:
• An estimated 50 million people worldwide, including over 5.7 million Americans, are living with dementia.
• Alzheimer’s disease is the 6th leading cause of death in the United States and the only one without a cure.
• Every 3 seconds someone in the world is diagnosed with dementia.
• In 2018, Alzheimer’s and other dementias cost the United States $227 billion and is estimated to reach $1.1 trillion by 2050.

The Virtual Dementia Tour
The Virtual Dementia Tour is a scientifically proven method that builds sensitivity and awareness in individuals caring for those with dementia by temporarily altering participants’ physical and sensory abilities. The tour:
• Has been experienced by more than an estimated three million people in 20 countries.
• Has been implemented in over 1,000 healthcare facilities in the United States, Canada, UK, Israel and other countries around the world.
• Is used in more than 200 colleges and universities as an adjunct to existing curriculum.
• Meets and exceeds the federal government mandate that requires additional training for every healthcare entity providing care to those with memory impairments.

Carolina Pines is thankful for the grant and thrilled that so many team members participated in the training.